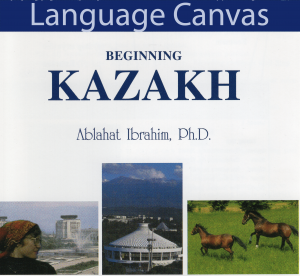 Beginning Kazakh will give you confidence communicating in Kazakh at an everyday level.  Learn to speak and understand Kazakh with native Kazakh speakers in a variety of cultural contexts. Watch video and learn about greetings, shopping, food, dining out, weather, education, literature, holiday traditions, and more.  With our specially designed video player for language learning you can pause the video at any point and scroll the transcription. Read annotations about culture and grammar. Click on almost any word or sentence to hear it spoken, along with translations.   This course can be used either by independent learners or by students in a traditional or self-instructional classroom setting, and is the equivalent of the material covered in a one-year college course.

Beginning Kazakh was developed and peer-reviewed by Kazakh language experts and used by college students as their first year textbook. It was originally published as part of the highly reviewed University of Arizona Critical Languages Series, and we have added many new mobile-friendly features.
The course contains 20 lessons, 10,000 audio clips, dozens of exercises, hundreds of annotations, and 25 videos performed by native speakers.

Just $6.99/month (6 month minimum) This is our Holiday Sale price which is 30% off our regular price!

Multiple Choice, Fill in the blank, and Listening Dictation exercises are provided for each lesson. A searchable audio glossary with thousands of words and translations helps you find every occurrence of a word or part of a word in all of the lessons. Downloadable podcasts (MP3 files) of all Kazakh sentence recordings for all lessons. Record your own voice and compare it to a native speaker!
Sign Up Today

Try one of the abbreviated sample lessons below with video, transcriptions, annotations, translations, and individual word and sentence audio recordings:

Table of Contents and Free Sample Lessons with Video

Introduction to the Kazakh Language and Alphabet

Ablahat Ibrahim received his Master’s degree in Central Asian Turkic Languages and Literature from Xinjiang University, Urumqi, China. He earned his Ph.D. from the Department of Asian Languages and Literature at the University of Washington, in the field of Turkic Studies. Dr. Ibrahim has lectured in Turkic linguistics and literature at Xinjiang University, and has taught Kazakh and Uzbek at the Department of Near Eastern Languages and Civilization at the University of Washington. Research interests include comparative Turkic linguistics, ancient and contemporary written Central Asian Turkic literature, and oral literature of the Turkic peoples of Central Asia.

Beginning Kazakh materials © 1995-2022 Arizona Board Of Regents on behalf of the University Of Arizona. Used under license.